See the Generations Chart for an illustration of  family relationships.

**IF YOU BELIEVE YOU ARE RELATED TO ANY OF THESE LINES, PLEASE CONTACT VIA THE FEEDBACK FORM**

The earliest documented MacPhersons in our family history are Duncan [1] & Mary (Maclean) [2] McPherson.  There is no record of them other than in the death certificates of their sons Malcolm, Angus, Martin & John, in which they are named as parents. Duncan is described as a crofter, however, he probably started as a joint tenant in one of the old-form townships, rather than the lotted crofts of the 19thC.

Their sons were born in the last quarter of the 18thC, so Duncan & Mary were posssibly born about the 1750s-60s (there may have been other children whose records are missing).

The sons, apart from Martin, who is recorded as having been born in Minginish, Bracadale, were born in Sleat.

Martin was named as the father of Isabella McPherson on her death certificate. Isabella's mother was Mary McPherson (d. of John & Ann McPherson), who died at Kilmore in 1863, given age 80 years. Isabella had a son named John Campbell. Isabella died unmarried at Sasaig, Sleat, in 1876, age given 61 years.

Hector [15] was born in 1822.  He married Elizabeth (Bessie) Macleod [125] , daughter of Donald & Catherine (Robertson) Macleod.  They had 4 sons.  Hector lived in Harrapool (Broadford) and gave evidence to the Napier Commission in 1883.

In 1851, Duncan, shoemaker, given age 33, was living in the home of his in-laws Angus & Chirsty MacDonald in Ferindonald, with his wife Mary and daughter Mary, given age 6 months.

Reputedly due to famine and lack of work, Duncan & Mary, with children John & Mary, emigrated to Australia from Liverpool on the 'Hornet' on 29 July 1854, arriving at Geelong on 23 October 1854. They settled and farmed at Cumberoona, near the present city of Albury (close to the border with the State of Victoria).

In his obituary, Duncan was described as "of the stuff whereof pioneers are made...Patriotic, like most of his country-men, he was always ready to talk about Scotland."

Some of Duncan & Mary's descendants are pictured at a reunion in NSW (see image on Home Page).

In censuses, Donald was described as a fisherman until 1871, when he was a crofter in Sasaig.  He died aged 83 in 1907 aged 82, according to his death certificate. Chirsty died 7 years later (see headstone image).

In the latter part of their lives, Duncan and Alexina lived in Glasgow - at Blackburn St. (1891) and with their daughter Jessie in Smith Street.

Angus [26] (1826-1905) was unmarried.  Although he was born and died in Kilmore, Angus, a 92nd Highlander (Gordon Highlanders), spent a good part of his service (1847-??0 overseas, in the Ionian Islands, the Crimea and Indian. He was awarded the Indian Mutiny Medal and the good conduct and long service Medal. 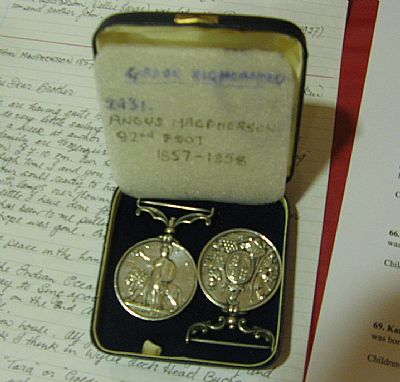 In the latter part of his life, Angus, a Chelsea Pensioner, occupied croft No.3b, Kilmore with his unmarried sister Ann.

Margaret/Mary [31] married John Kennedy, son of Malcolm & Mary (MacPherson) Kennedy in 1865 at the Free Church, Knock, Sleat. They lived in Bridge of Weir and Ayrshire. They had 2 sons and a daughter.

Four of their children and their families emigrated to the United States of America.

In the 1875 & 1880 cenuses, Duncan's sisters, Mary & Isabella respectively, were recorded visiting them in New York.

Duncan was a shipping agent. He funded the erection of a headstone to his parents and brother William in the Kilmore burial ground in Sleat, Skye. He died in Kings, New York on 19 March 1881, having left his estate to his three sisters and to his daughter, Rebecca.

Isabella [34] was born about 1824, and died in 1910. According to census records, Isabella was a dressmaker living in Ferindonald. She was unmarried. In 1880, she visited her brother Duncan in New York and was a beneficiary of his will of 1881.

John contested his brother Duncan's will of 1881 in a court case which he lost.  At the time, he was living with his wife at 262 West 47th Street, New York.

Elizabeth [36] was born in 1832 in Barony Parish, Lanarkshire. She married Alexander McKay [128], son of Dougald & Anne (Jenkins) McKay, in 1857,  at 28 Abbottsford Place, Glasgow. Alexander had been born in Thornliebank, Renfrewfrewshire. While in Scotland, he was variously described as Cotton Bleachfield Labourer, Mechanic at dye works, and Engineeer. Elizabeth & Alexander had a 4 sons & 3 daughters born in Scotland. They emigrated to the U.S.A. in 1869. They had 3 more sons born in the U.S.A. In the U.S.A., Alexander was a merchant.

William [531] was born in Gorbals, Glasgow, in 1837 and died three years later. He is commemorated with his parents on a stone at Kilmore burial ground, Sleat, Skye.